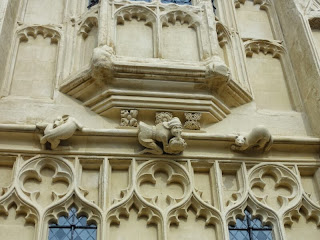 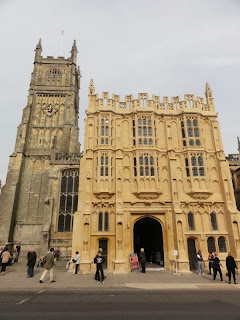 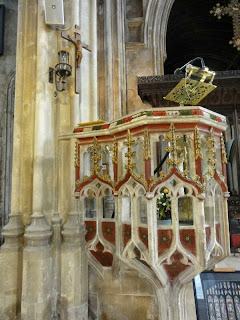 Spending the morning visiting Cirencester, which was the second most important town in Britain in Roman times.
We didn't see the Roman remains as instead we were impressed by the exterior of the Parish Church.
The first thing that strikes you is the golden South Porch that was built in about 1,500. It has been cleaned and renovated over the last couple of years. Most of the carvings were repaired but a weasel and a deer, that are clinging on to a ledge just below the first floor, window have been recarved as they had been almost completely worn away.
Inside it is very ornate and the pulpit is 'in a rare and finely worked wine glass design'. My favourite bit was the large sermon-timer hanging on the wall, (same principle as an egg-timer) to make sure they don't over-run.