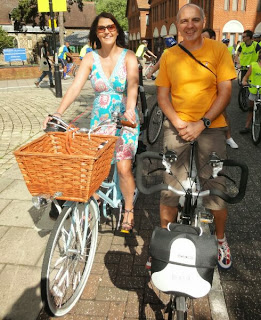 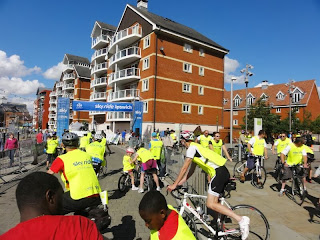 When Darren's sister suggested that we go on the Sky ride I was worried as I am not a roller coaster fan, but it turned out to be a cycle tour through Ipswich town centre.
A 5 kilometre route was cordoned off and closed to traffic for most of the day and hundreds, if not thousands of people turned up to cycle around the route.
Most people wore bright yellow Sky bibs but we ignored that plan, and it definitely it wouldn't have gone with Nicola's dress.
The route course was good, pretty flat and Ipswich is surprisingly scenic, although we did have to rumble over lots of cobbles and kerbs.
We went round four times and then headed to the pub for a well deserved lunch.