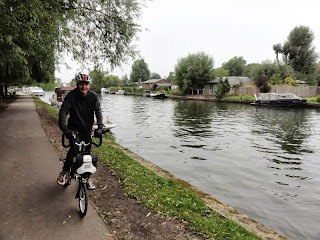 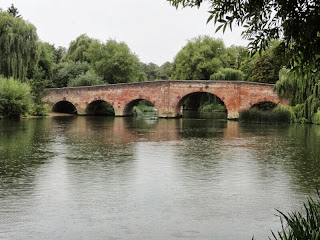 We explored Henley yesterday and as expected, it is very picturesque and posh.
Today the weather forecast was for rain for most of day, but we decided to cycle along the Thames to Reading. It was good going at first along a dried mud footpath, but once it started to rain the mud was as slippery as ice.  My tyres are completely slick so after the third near disaster, I decided to run and push instead.
Eventually we got to Sonning bridge which was in the papers a couple of weeks ago, as a postbox has appeared on one of the arches in the middle of the bridge, but it can't be reached either from the road or the water!  I zoomed the photo in and it is also upside down.
By the time we got to Reading I was soaked through but fortunately we found our destination very quickly - the hifi department of John Lewis.
Darren bought some mini speakers so now, in the immortal words of Cliff Richard, our van is 'wired for sound'.