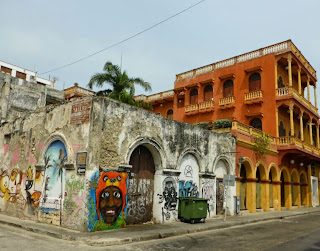 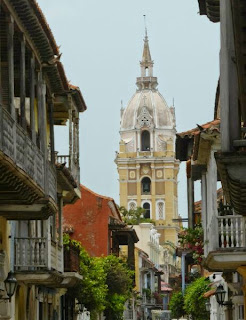 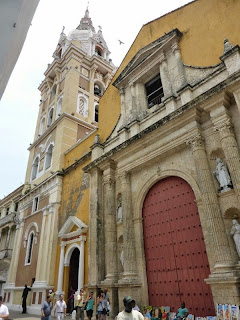 We have been on a few cruises, but this is the first time we have been given a letter warning us to take great care on shore, and providing the phone number of the British Consulate that 'you may wish to preload on to your mobile phone'.
It was also highly recommended that we take a taxi from the docks to the Old City, but of course, we walked there.
We had no problems on the walk, apart from it being so hot and humid that we arrived looking as if we had jumped in a bath en route.
The first thing we did was head into an air conditioned shop and loiter for a few minutes to cool down.
Once our body temperature started getting back to normal we started to look around the city, which is a World Heritage site.
The Old City is inside a large fort and is full of buildings from the 17th and 18th centuries. It was all very pretty, with lots of brightly painted shops and houses, most of which had wooden balconies that overlooked the streets.
We stopped for a proper cup of Columbian coffee in a local bar - mysteriously it was called KGB and had a Russian cold war theme.
It rained quite heavily while we were in the bar and I hoped that it might have cooled the temperature down, but no, it was still like walking along in a sauna, so we sensibly decided to get a taxi home.
Ps, it seemed a friendly place and we had no problems, so we didn't have to bother the British Ambassador after all.