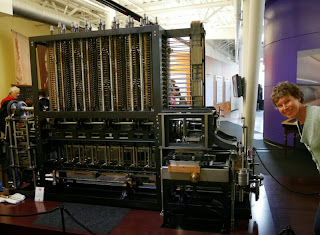 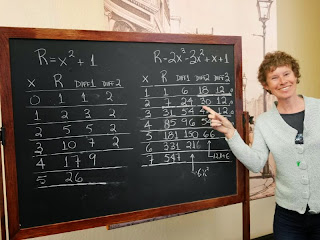 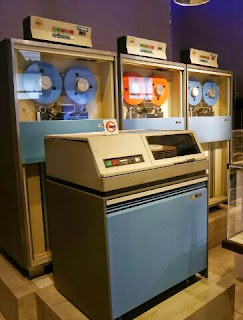 We have a few days in California, so what did we do today?  We spent the day inside the Computer History Museum in Mountain View, Silicon Valley.
In the late 1990's we used to live just down the road in Sunnyvale, and Darren worked in the computer industry, so it was a trip down memory lane for him.
It was all interesting if very complicated at times for me. I particularly struggled with the algebra demonstration, although all of the geeks in the audience were following it intently and asked really clever questions. I said nothing and I won't try to explain it, as to be honest, I didn't have a clue what was going on.
There was a massive machine (pic 1) that answered the questions on the blackboard (pic 2), along with many others questions that people may have.  It was built in the 1990's from plans made by an English man called Charles Babbage in 1847. Yes, that was 1847 and not a typing error.
I was pleased to see that quite a lot of English people made it into the museum including Ada Lovelace (lady mathematician), Alan Turing (Enigma) and Tim Berners Lee (inventor of the Internet).
There was also a lot of computers on display, as you would expect in the worlds best computer museum.
Ps, sorry that this blog is very vague, and full of inaccurate information. It really was a good day out.