Are we homeward bound? 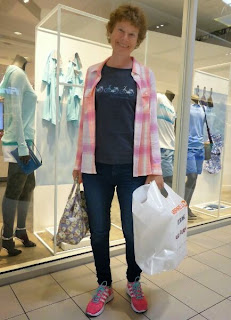 We woke today to cloudy skies and the promise of rain, so we decided to head for the gigantic Sawgrass Mall in Fort Lauderdale on our last day in America.
I haven't mentioned it previously but we have visited a few malls during our travels and bought quite a lot of stuff.  We had been worried about getting our things home as we have only paid for carry on luggage.
Our packing went well this morning though, and we managed to cram everything in.
The plan today was to only do a little window shopping in the mall, but this was abandoned very quickly. I bought two pairs of sandals, three blouses (I am modelling one in the photo), and two teeshirts. Darren was a bit more restrained and only bought a pair of trousers, a jumper and two teeshirts.
At the airport we had a panic cramming the extra things into our bags, and we now have an overspill carrier bag that we managed to get past the check in lady.
Everything was looking good, until she told us that our flight to London is delayed and we are not now expected to set off until well after midnight. It is looking likely that we are going to miss our connection to Spain - it will be a very close call, but it looks like we may be stranded in London tomorrow afternoon!
Further update later.......