Journey through the Panama Canal 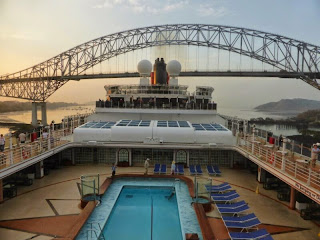 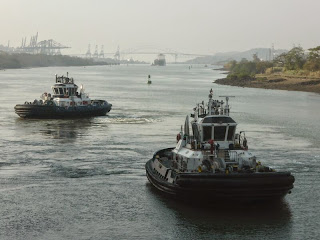 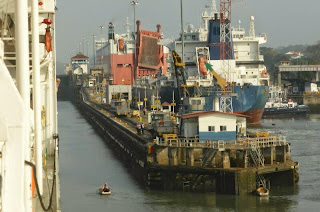 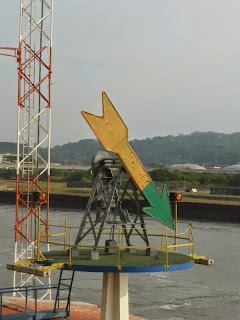 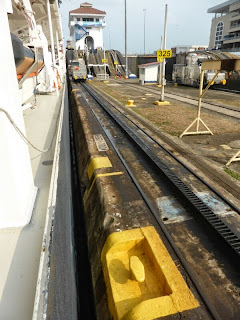 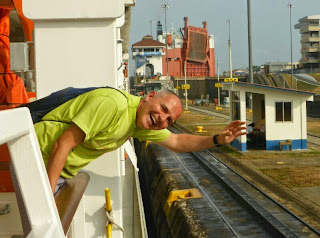 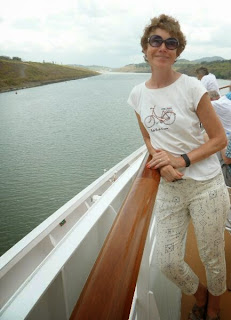 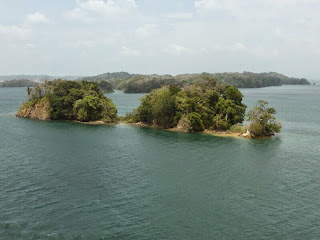 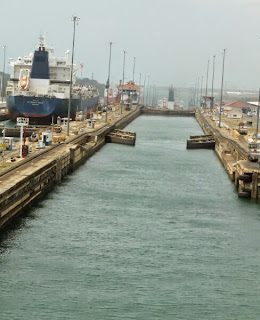 Early start today as we arrived at the Pacific side of the Panama Canal just after dawn.
Firstly we sailed under the Panamerican Highway bridge just next to Panama City. I woke up with a cup of coffee on the top deck and looked forward to arriving at the Miraflores Locks.
We were escorted by a couple of tug boats up to the lock and then two guys in a tiny rowing boat rowed in front of us to pass over a rope that starts the process. There is also an arrow which tells us which of the two lock gates that we have been allocated.
The canal is 48 miles in total and saves an 8,000 mile journey around the south coast of America, so it was no coincidence that the Queen Victoria fitted exactly into the lock, with 9 inches to spare!
We were hooked up to little trains on either side to make sure that we travelled in a straight line, but we bumped the rubber sides very loudly on the way in, although non of the crew seemed concerned.
Obviously, it was a great day for photos so Daz leaned over the side and nearly touched Panama, while I enjoyed the scenery along the way.
The locks raise the ships 85 feet above sea level, then a beautiful man made lake takes the ships across the narrowest part of Panama. The whole area is thick rain forest and there was a couple of heavy showers as we cruised along just to prove the point.
Once we neared the other side we made our way down the Gatun Locks to the Caribbean Sea.
The journey took all day and incredibly, it took 52,000,000 gallons of fresh water to get us from the Pacific to the Atlantic Ocean.
What a fantastic piece of engineering that has been in constant use for 101 years.