On board with Buzz Aldrin 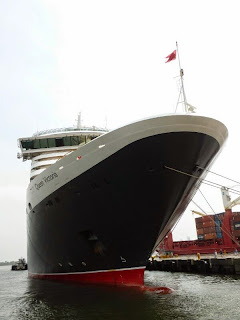 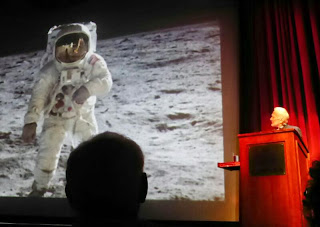 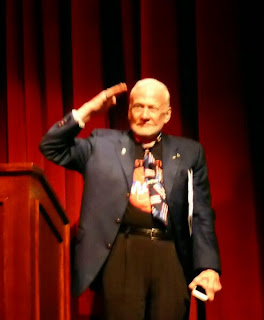 Today was my highlight of our cruise - the astronaut  Buzz Aldrin gave a lecture on the ship.
He flew on the Apollo 11 spaceship, and on 20th July 1969 he was the second man ever to walk on the moon. He stepped down after Neil Armstrong and they spent 21 hours on the surface before returning to earth.
It was such a privilege to see him and we sat on the second row, so were really close to him.
He told us all about his life, why he decided to become an astronaut and all about the journey to the moon.
It is nearly 46 years since that amazing day, but he was so enthusiastic and interesting.
The most famous photo from the journey was of him, with the reflection of Neil Armstrong in his visor.
He said that the reason it is such an iconic shot is all down to the 'location, location, location'.
Nowadays he is over 80 and campaigns for support for a mission to Mars, although he actually has plans for many missions, not just the one.
He made it sound great, but think I have left it a bit late to become an astronaut - also I am far too thick, quite scared of heights, and not keen on the dark.