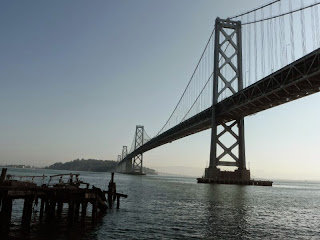 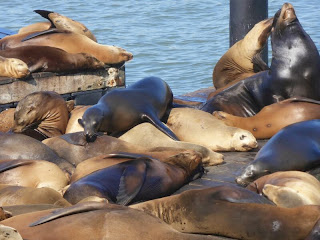 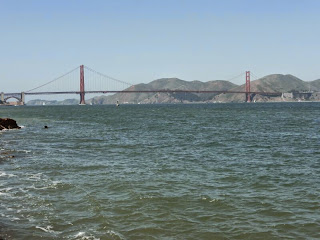 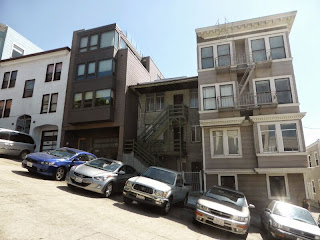 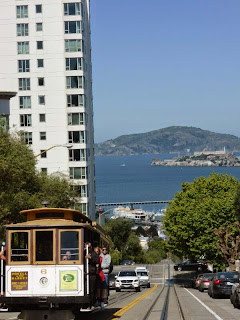 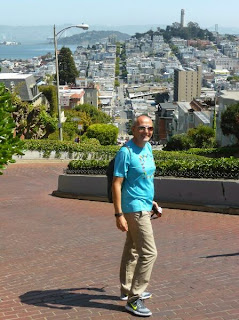 Outstanding day trip today to San Francisco. We caught the Caltrain up to the city and spent the whole day sightseeing and walking for miles.
We started off along the bay, and under the gigantic Bay Bridge. We then arrived at Pier 39 and took a detour to see if the sea lions still lived at the end of the pier. They certainly do, and there were at least 100 of the smelly beasts lazing around in the sunshine.
Next came the longest hike of the day as we went round the top of the city towards the Golden Gate bridge. It was too still quite distant, but we were too tired to go any further.
We headed back to town along Lombard Street. It started out flat, but then got so steep that I was almost crawling up to the top. I was so shattered that I didn't think to take a photo, but pic 4 is of another street that we walked up later - it was nowhere near as bad as Lombard, but hopefully you get the idea.
Once at the top we looked down Hyde Street to see Alcatraz island out in the bay, (pic 5) and a trolley bus heading up the hill.
The downward slope of Lombard Street is one of the most famous in San Francisco, as it is so steep that it twists and turns all the way down.  It is more like a slalom ski run rather than a straight ski jump.
There was dozens of tourists all taking photos, so obviously I had to get a shot of Daz before we chugged down the other side.
It didn't end there as we went up another monster hill, through the Financial District and finally back to the station.
Shattered and jet lagged, but very happy.