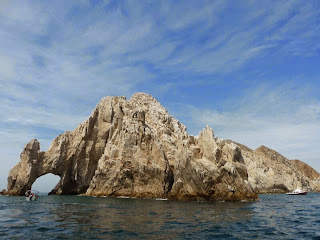 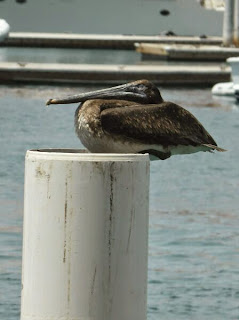 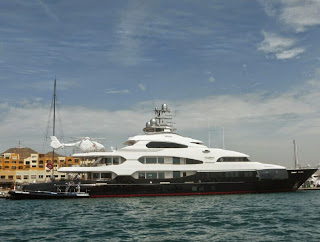 We set off on our cruise from Los Angeles and after two days at sea we arrived today at Cabo San Lucas in Mexico, which is in a very isolated area at the bottom of Baja California.
We took a glass bottom boat ride out to see it's famous rock archway - that sentence is a bit misleading as the arch is above water, but we saw a few fish on the way. To be honest the sea was a bit rough for leisurely fish viewing and I was quite glad that our captain wasn't a very enthusiastic host, and he took us quite quickly back to shore.
There was only four passengers on the boat, us two and two middle aged American ladies, one of whom was very large. Instead of taking us back to the jetty that we set out from, the captain stopped at a beach. To get off the boat we had to climb on to the front of the boat, sit on the side then jump quite a distance down onto the sand. I went first, timed my jump between waves and made it safe and dry.
The large American lady went next but couldn't make the jump. She collapsed in a big heap and a small Mexican man was holding her hands and trying to lift her out of the water. Unfortunately, he was unsuccessful and she got completely soaked as she rolled around trying desperately to get back on her feet. I can't imagine that she left a tip.
Solid ground was nice after all the action and we enjoyed watching the pelicans, sea lions and other enormous sea birds. They ruled the Marina and sat wherever they wanted, even occasionally defying the laws of gravity.
There was also a very impressive billionaire's yacht sitting in the Marina, and it had a gift wrapped helicopter sitting on its deck. Usually the Queen Victoria is the best looking vessel around but today she was definitely outclassed.