We have moved from the bottom of Taiwan to the centre, left hand side. The city is called Taichung and the guidebooks say that there is little here to catch the eye. I have to agree that this is true, but it would have been a shame not to see more of the country, so here we are.
In 1999 a 7.3 magnitude earthquake hit this area and a faultline that was 100 kilometres long opened up.
We caught a bus to the museum to find out more about it. The museum is centred around a school that straddled the faultline. 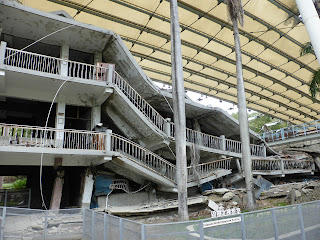 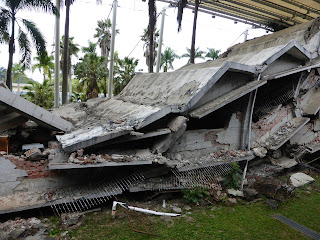 They have built a roof over the original school buildings which all just completely collapsed and folded in on itself. Fortunately the earthquake happened in the middle of the night so the school was empty.
The most amazing thing was that when the fault cracked open it pushed the earth up over two metres on one side at area around the school, but up to ten metres higher further down the faultline.
It went along a stream, straight across the school running track, under the school and then the town. 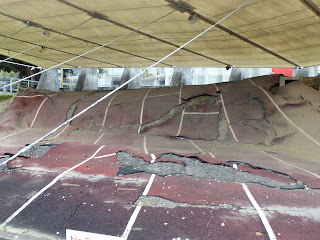 It's a bit difficult to see in this picture, but that used to be a flat running track. The fault also ran through tea plantations where the straight lines of the bushes turned into wavy lines, and the same thing happened to railway lines. It caused a 100 km line of devastation and killed over 2,000 people.
We went into a simulation room and sat down on the padded floor while they recreated the 40 second earthquake. It was terrifying and amazing that anyone survived.
Afterwards we found a place called the Dali Art Plaza which we thought might be about Salvador Dali, but I think not. We never did find out anything about the background  but it had some good and rather large exhibits. 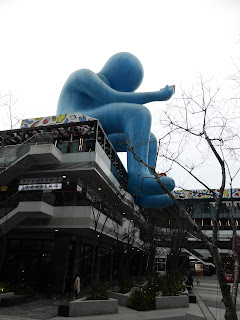 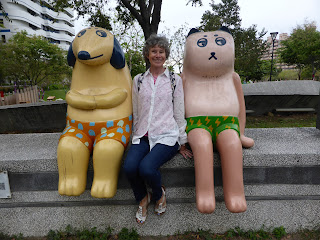 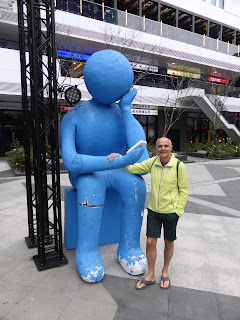 Ps, found the first Christmas tree of 2019! Actually I think that it is there permanently . 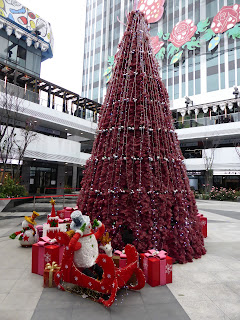