Went out for a jog along the river in the morning. Cities in Japan are amazingly hard to run in because the roads are all on a grid system and most have traffic lights at each corner.
This means that every 50 metres or so we have to wait for the lights to change, and that can take a very long time. The Japanese people never cheat and walk across if the road clear, and we end up waiting too.
Darren pauses his watch  but mine doesn't always like that so I jog up and down the pavement while people look on in surprise.
Sometimes we zigzag down adjacent streets and sometimes we look ahead and sprint like maniacs to try to get the lights.
Fukuoka was particularly bad, but then we got to the river and could run along the riverside path, before zigzagging back to the hotel.
Next we caught the train to Hiroshima and had a little rest. 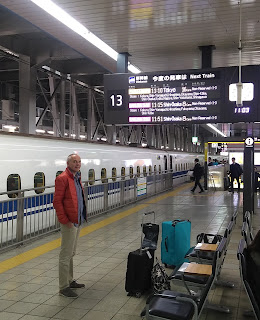 Another strange thing about Japan is that you cannot check in to the hotel until the exact time stated, usually 3pm. What happens then is that there is a huge queue at check in and for the lifts.
No one ever breaks the rules, they are always polite, and instructions are written everywhere, but at least you know where you stand.
To pass the time before check-in we went to a local restaurant serving local dishes. This doesn't always work in our favour and yesterday we had the most awful pudding. It was six sticks of very chewy stodge, apparently rice, covered in a brown goo that was called caramel but didn't taste like it. It was all covered in a brown powder that we thought would be sugar, but I have no idea what it was.
Today I had cold noodles and lots of lettuce and cucumber. It came with a spicy chilli sauce full of sesame seeds.
They kindly supplied a paper apron which was fortunate as I sprayed the sauce all over myself as I tried pick up the slippery ingredients and get them in the general direction of my mouth.
Daz tried the same as me but with fried oysters, which he quite liked. 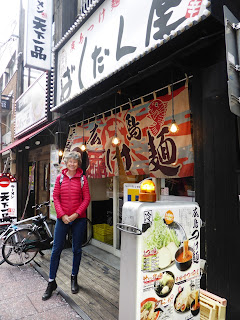 See menu board in this photo.
Posted by Christine at 01:54