Best in the world at the squash 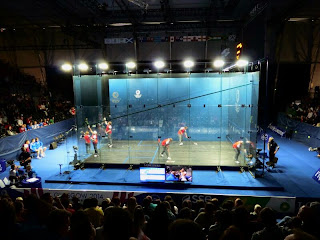 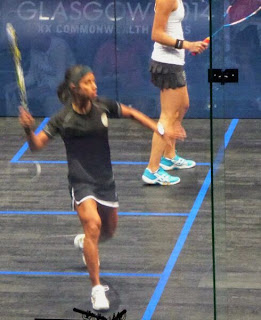 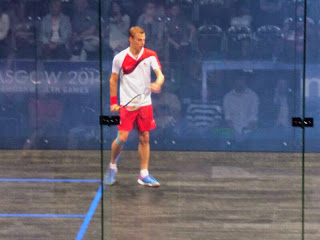 Had an interesting time getting to the squash today.  We stood on the train station and less than five minutes before the train was due, they announced that it had been cancelled!
We waited half an hour for another one, then once we got to the centre of Glasgow, the women's marathon meant that all of the bus stops had been relocated and the timetable abandoned.
We arrived at the squash with eight minutes to spare and settled down to an amazing sight - five cleaners simultaneously polishing every angle of the glass court ready for the action to begin.
Firstly we saw Nicole David, world number one from Malaysia get through to the ladies final tomorrow by beating a New Zealander. The other ladies semi final takes place tonight.
The mens semi final in our session was an all English affair, Peter Barker the current world number eight against Nick Matthew, the best player in the world. It was a very bad tempered match in places, but it was great to see Nick get through.
Finally, we had to battle our way back home through the bizarre public transport system that is in operation during the Commonwealth Games.