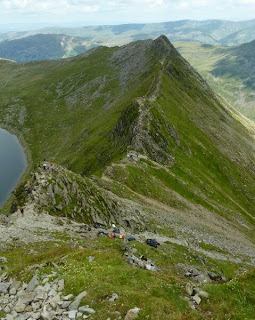 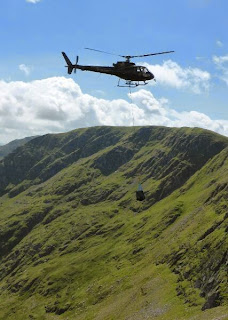 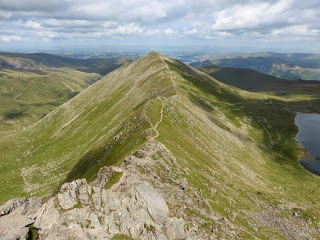 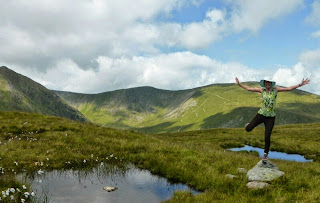 Darren spent ages this morning plotting our third ridge walk on his phone. This one was called Helvellyn by Striding Edge, and descent via Swirral Edge and Catstye Cam. Quite a mouthful and actually, quite a trip.
Firstly, it was totally different to our last walk in that there was lots of other people about, and the path was really obvious - in fact we didn't need a map all day.
All started well with the usual endless uphill stretch and then a long fairly easy bit where we strode along quite quickly. Gradually we could see in the distance a rocky outcrop on the top of the hill, and lots of little brightly coloured people clambering along the top of it.  (Zoom in on pic one if you don't believe me.)
This is actually Striding Edge and there was no striding along this section. Instead we gingerly inched to the highest point of it and joined a group of people,  which eventually totalled at least 100.
We all had to wait while the National Park staff used a helicopter to transport rocks up on to the side of the mountain to try to stop a section eroding.
It was very interesting and dramatic, and we also watched while an air ambulance helicopter landed far below us to collect an injured hiker.
After a long wait everyone was getting fidgety and we were then allowed to climb down a really steep ridge and then there was a group charge up the side of Helvellyn. It was a bit chaotic but we both cambered up quite quickly and arrived safely at the top.
Here the group gradually dispersed and we climbed down (mostly on my bottom) the Swirral Edge, (see pic three) then up the final climb of Catstye Cam. This one was not scary, but at the top there was a perfect cone mountain top, with 360 degree views.
After all the excitement we marched down to the pub for a quick pint, and then back on our bikes for the painful uphill climb back to our campsite.
Epic!