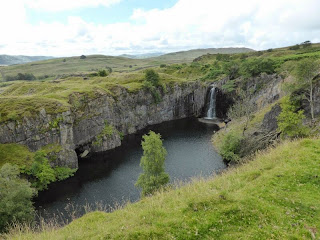 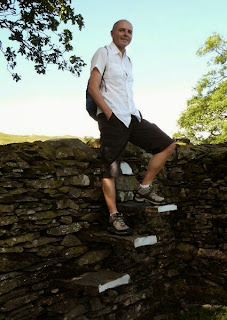 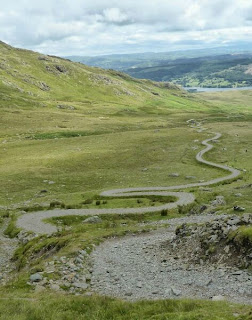 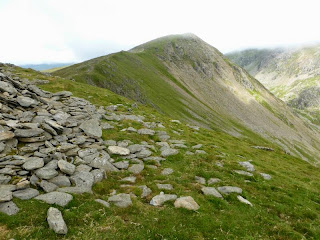 I set a new record today by walking 31,703 steps on my fancy step counter. I achieved this because we are in the Lake District and we did a 16 k circular walk from our campsite.
It was basically up, up, up, then flattish along the ridge of five separate peaks, then down, down and down.
Elaine and Mark leant us a book called 'Great British Ridge Walks' and we followed number 11 to the letter - but we had to walk quite a distance to get to the starting point, so it was quite a lot longer than the recommendation.
Also, I must be a bit thick, but I didn't realise that a ridge walk was along the top of the hills with a sharp drop either side, so it was a bit of a shock. Fortunately, that section was completely covered in thick, wet cloud, so I couldn't see how steep the sides were.
They also warned us to take lots of warm clothes - just in case - and I ended up wearing it all. Teeshirt and sunhat on the way up, thermals, gloves and woolly hat along the top and then back to the first outfit on the way down.
We were pleased with our new boots as we stomped through mini streams and over rocks. At one point they were very useful as we took a wrong turning and had to climb a high stone wall and then drop the other side into waist high bracken.
Great day out, hoping to try another one from the book very soon.
Ps, if you are interested, the peaks were Brown Pike, Buck Pike,  Dow Crag, Goat's Hawse, Brim Fell and Coniston Old Man.