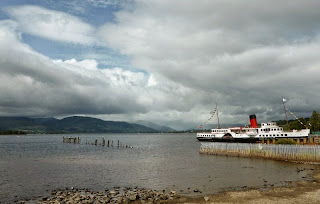 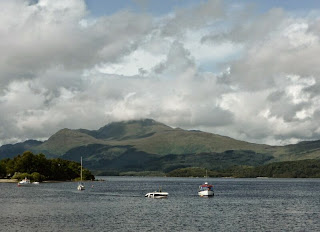 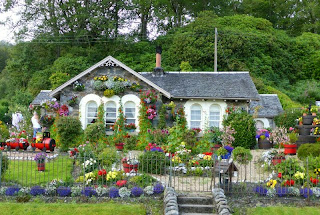 Left Glasgow this morning, heading north. Not too far though as we have stopped overnight at Balloch on the southern shore of Loch Lomond.
The weather was forecast to be bad, but we arrived to sunshine, so set off to explore.
Balloch has a pretty waterfront, with surprising numbers of people paddling and swimming in the loch.
Decided not to join them, and instead follow the cycle route along the western shore up to Luss. Very disappointing as rather than hug the loch, it hugged the main road and was actually only a narrow pavement for most of the route. We didn't see the loch again until we reached Luss, but it was worth the journey as it had a nice pier with great views of Ben Lomond.
We bought ice creams and watched as people jumped off the pier, right next to the sign that said 'no swimming'.
The village was full of cute little bungalows, most of them with beautiful gardens. We noticed a sign saying that the judging of the best kept village garden was tomorrow - if I was in charge picture three would be the clear winner.