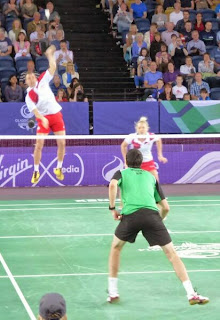 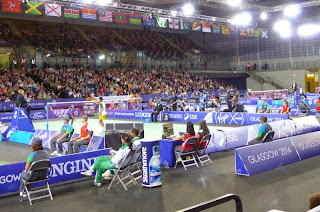 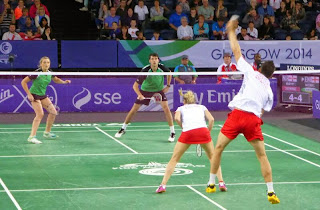 We have spent the last couple of days watching badminton at the Commonwealth Games.
Yesterday we saw the first round and watched a guy from the Norfolk Islands play the Scottish number one.
Apparently, only about 1,000 people live in the Norfolk Islands and only six of them play badminton, so it was not surprising that he struggled. I am sure that Darren could easily beat him, but he had a lovely time, diving headfirst all over the court and politely applauding when he opponent played a good shot - which was obviously all of the time.
Fortunately, the standard was better today and we had good seats to watch the number one seeds, Chris and Gabby Adcock win their game.
Here comes our claim to fame - Chris is from Ravenshead, which is just north of Nottingham, and when he was still a little boy, Darren and I played a team match against him and his mum. It would sound better if we had won, but unfortunately not.
Ps, he seems to look a bit orangutan like when he hits his overhead shots, but then, what do I know.