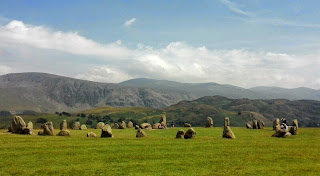 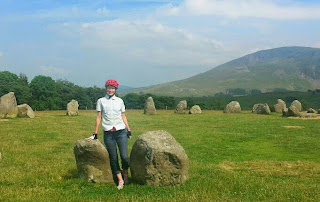 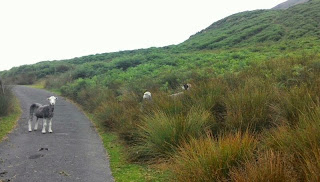 Got the bikes out today for a ride to Keswick. We followed the Sustrans route, joining it about two kilometres from our campsite. Firstly we cycled along a completely straight Roman road that stretched ahead of us like a curly ribbon. It didn't go far though, and it did seem a bit of a crazy idea on such hilly terrain.
Next we rode up one side of a valley for a very long way, then turned an unbelievably sharp corner and headed back on a parallel road on the other side of a stream. It was very pretty, but we cycled a very long way to avoid a few hundred metres of busy main road.
Then we climbed up amongst the sheep, stopping frequently to open and close gates.
Finally, we followed a disused railway track, complete with many bridges over a lovely stream, and a couple of tunnels through rocky outcrops.
Arrived in Keswick at lunch time, so had a lengthy stop in this pretty town.
On the way back we took a very hilly route and passed some standing stones. They were about 4,500 years old and the site that the ancient builders chose was superb - a beautiful level grassy area with panoramic views of the mountains.
After a quick stop we cycled towards  home on a route called The Old Coach Road. It took an almost Roman style direct route up a huge hill and I felt sorry for the old horses that would have pulled the old coaches.
It was also very gravelly with a massive headwind, and was a hill too high for me.  In the end, we admitted defeat, retraced our steps and slowly slogged back along a more modern route home.