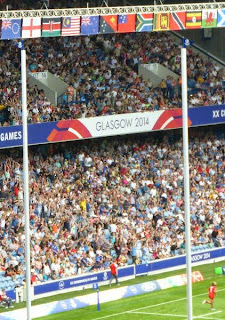 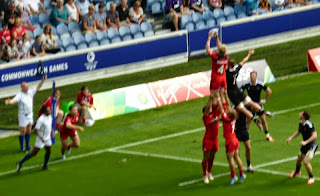 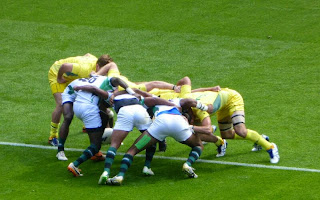 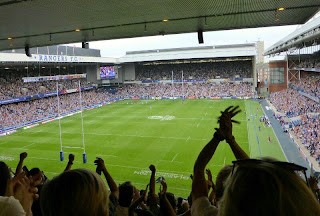 Cycled from our campsite to Ibrox, Glasgow Rangers ground, to see the Rugby Sevens.
Had a bit of excitement en route as we joined two Scottish and two Nimbian female competitor cyclists in a mini peloton through the Glasgow streets. The Scots were giving a guided tour to the visitors and weren't in a hurry, so we managed to stay with them for a while, until they dropped us on an incline.
Arrived at the stadium to find a fantastic atmosphere, as 40,000 mainly Scottish fans cheered almost everyone. We were there for the first rounds of the round robin, so we saw all of the teams. Each game only lasted 14 minutes in total,  and there was a wide range of ability amongst the different teams, so the games were fast and furious.
Australia were very strong and by the time they played their second match, the crowd was getting rowdy. Uganda was Australia's second opponents and once again, Australia quickly went into a huge lead. The crowd started a chant of U Gan Da, and were booing every time Australia scored. Suddenly Uganda headed down the pitch and the whole stadium were on their feet cheering them on. When they scored a try, the whole place exploded!
England played a few games later and had a good win against Sri Lanka, and then came the key match - Scotland v New Zealand.
Huge and deafening crowd support followed every Scottish move and they finished a close second, but apparently New Zealand have never been beaten.
Brilliant audience, great spectacle and looking forward to watching the later rounds, but unfortunately only on the telly.