Up close to the medallists 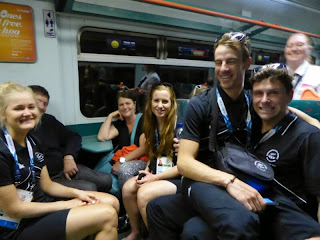 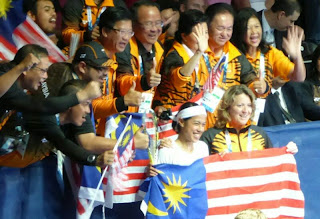 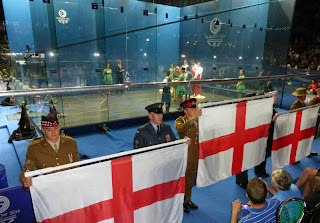 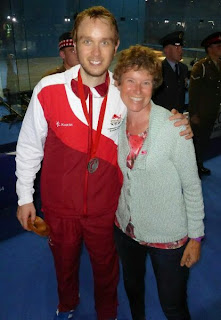 We were sitting quietly on the train making our way to the squash this morning,  when suddenly we were surrounded by lively Kiwis. It was the New Zealand track cycling team and they were going to Kiwi House for a celebration.
The gang were lovely and posed for a photo. The guy on the right is Eddie Dawkins who won a gold and a bronze medal, and sitting on his knee is Marc Ryan who got two bronzes. The girls were also on the team but hadn't won any medals.  Eddie was keen to get back to the House as he went there last night and managed to leave his medals behind, so I think he was celebrating then as well.
Arrived at the squash for finals day, and it was looking really good for England as we had five players competing.
In the ladies playoff for the bronze medal, a Kiwi beat Alison Waters from England, and then in the final Nicole David from Malaysia beat another English player, Laura Massaro. So silver and fourth places - not bad.
On to the mens and bronze place was won by Peter Barker from England. All that remained was an all English final between James Wilstrop and Nick Matthew, so we weren't sure who to support.
It was an epic five set final, but eventually Nick clinched it for Sheffield and England.
We were right next to the flags for the medal ceremony, and stood to attention for the national anthem.  Then came the best bit,  a photo with the friendly and charming James Wilstrop and his silver medal.