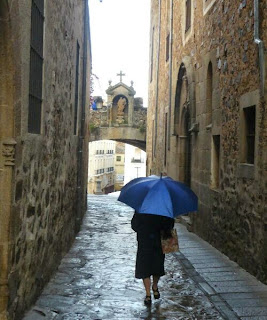 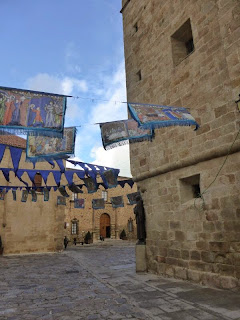 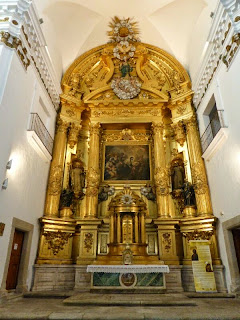 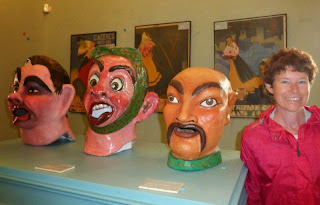 'The rain in Spain lies mainly on the Plain.'
I don't know if this is strictly true, or even if we are on the Plain, but the area around the city of Caceres is flat, and the fields are all green and fertile looking.
They contrast nicely with all of the brown scenery that we have been seeing for the past few months.
It has rained a few times overnight recently, and it even wet the ancient streets Caceres this morning.
Caceres is an ancient walled town in South West Spain - not too far from Portugal. It is a completely walled city that is full of  plazas, churches, museums and a few buskers.
We had a look around a beautiful church, a strange museum and underground Roman cistern full of pillars and water, but the information was only in Spanish so I can't tell you anything about them.
We also stumbled across two buskers, one with a guitar, who wailed through a very atmospheric tune at the top of their voices. It echoed around the old buildings and when Darren gave them some coins they smiled and ramped up the volume even more than I would have ever believed possible.