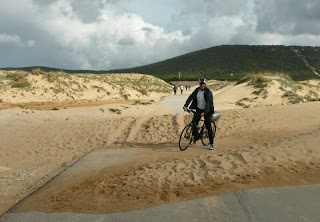 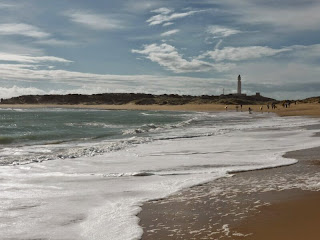 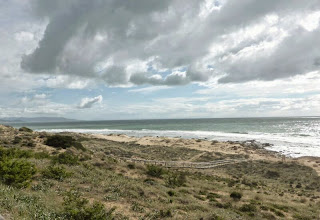 We cycled to a very famous place today, although I had no idea until a couple of days ago that the location for the battle of Trafalgar was in southern Spain.
We had a nice cycle along very quiet roads to the turn off to Trafalgar lighthouse. There is then a little road that leads out onto a narrow spit of land, which suddenly disappeared under the sand. We had to push the bikes quite a way over sand dunes until the road reappeared again as it gained a few metres in height up to the lighthouse.
It is a beautiful area with lots of surfers trying to catch the rather large waves. We had a good look around and stared out to sea.
Being very ignorant of English history, I had heard of the battle of Trafalgar, but knew very little about it. If you are also vague on the details then this is a short outline.
On the 21st October 1805 a naval battle took place between the English navy and a combined force of the French and Spanish. The English were lead by Horatio Nelson and were heavily outnumbered by the opposition.
Nelson flew the famous flags that instructed that 'England expects every man should do his duty' and then attacked. It was a very brutal battle, Nelson was shot and died later that day, but won a great victory.
Over 3,000 French and Spanish sailors were killed, compared to 449 British dead, and thousands more were wounded on either side.
Then before the survivors had chance to return to their bases, a huge storm blew up and thousands more sailors were shipwrecked and drowned.
Nelson's body was preserved in a barrel of brandy and returned to England for a heroes funeral.
I said it was a brief outline!