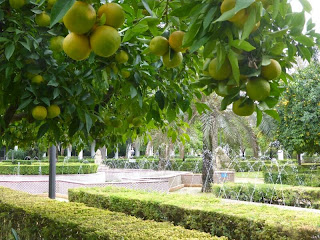 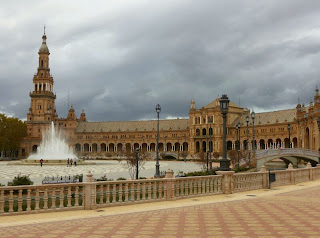 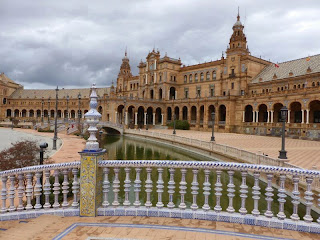 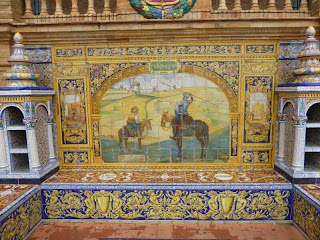 According to mythology, Seville was founded by Hercules. Not sure if this is true, but it definitely is now the capital of Andalucia and the fourth largest city in Spain.
We arrived here this afternoon and have parked in a glorified car park about 20 minutes walk from the city centre. It is part of what looks like a car storage and delivery company and they have set aside a corner for campervans. It is popular though, as there are about 25 vans alongside us, and for £12 a night, who can blame them (and us).
After settling in we walked to Seville, and the first thing that caught our eye was a beautiful park full of orange trees - presumably the famous Seville oranges.
Just behind it was the Plaza de Espana. We didn't go inside, but admired the exterior of this very grand semi circular building. It had a fountain, semi circular lake with rowing boats on it and beautiful tiled seats all around the base of it of the building. Each seat depicted a different city in Spain and it made us realise how much more of the country that we haven't got around to visiting yet.
Looking forward to an exciting weekend as we are meeting some friends who are flying in from London in the morning.