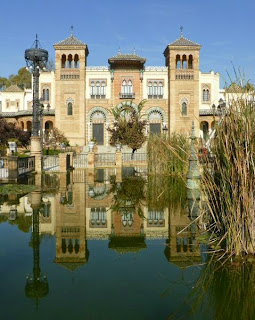 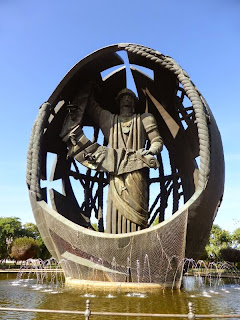 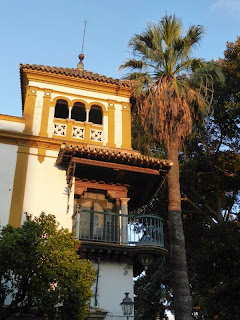 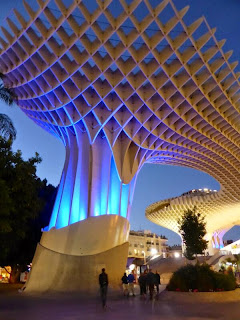 Tim and Vicky borrowed bikes from their hotel, we had our own, and we set off on a cycle ride along the Seville canal. The route was particularly beautiful, starting at the park next to the Plaza de Espana, see picture one.
We cycled about 10k to the end of the canal where we found a gigantic egg containing a statue of Christopher Columbus.
We followed the canal back on the other side of the water and I took over the navigation as we had to go inland because the riverside cycle path came to an end.
I confidently took us along various streets, with the plan of making headway inland while gradually heading back to the water.
After a while we rounded a corner and we were indeed back by the canal, unfortunately only a few yards past where we had left it but with a few extra kilometres under our belts. Fine for me and Daz, but not so good for Tim and Vicky's bottoms,
I rounded it off nicely though by then finding a route right along the waters edge that suddenly came to an end at the bottom of a large flight of steps.
Eventually we made it back to our car park for a quick look around our van, and then a siesta for some of us.
Early evening saw us on a walk around the Santa Cruz area with some interesting sights.
Picture three shows where I would like to live if I moved to Seville and picture four is an amazing mushroom building that we are going to explore further tomorrow.