Carmen from the cigar factory 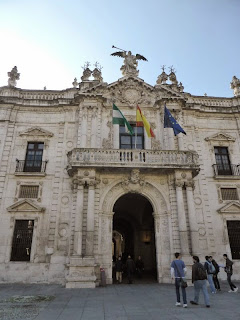 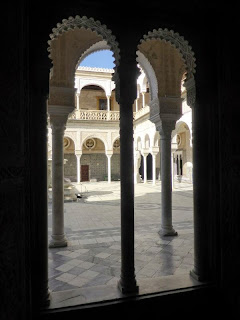 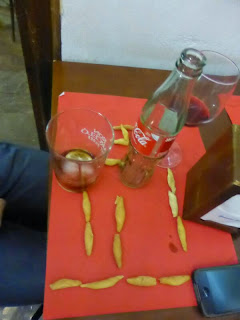 Tim and Vicky left us this morning, but not before trying to help us navigate the maze of backstreets in Seville with a customised map. It was made of dry biscuits with the Coke bottle representing a museum that we wanted to visit.
On our way there we stopped off at the Fabrica Real de Tabacos for a guided tour. The Tabacos was originally a cigar factory and is world famous as Carmen - made famous in the Opera - worked there.
In the 1800's 6,000 women worked there rolling the cigars on their thighs. (I thought that was just a myth.) They were a fun loving bunch who earned very good wages for the time, and were very proud of the independence that this gave them.
The factory is very ornate (pic 1) and is an enormous building, surrounded by a large paved area, a wall and a moat. These were there to stop employees throwing tobacco to their friends outside, and to spot people trying to get into the factory to steal the expensive tobacco. There is also a prison next to the factory for workers caught fighting or stealing. They were allowed out in the daytime to work, but then had to return to the prison to serve their sentence.
It was an interesting tour, but mostly in Spanish with only brief explanations in English, so it did drag at times. Note to self - must try harder with the Spanish tapes.
We then carefully followed the Coca Cola map, but we spotted a street sign leading to the museum, so we did cheat a bit. We were delighted with our success, although once there we decided that after spending so long inside the cigar factory, we couldn't be bothered to go around it.
Instead we decided to go to the Casa de Pilatos, a beautiful 15th century courtyard building.
Our entry ticket included audio guides so we switched them on and headed inside. The commentary was truly appalling, it sounded as if someone had translated the original Spanish into maybe Chinese, then into Welsh and then finally in to English. The result was just about unlistenable as there was so many words in completely random orders that seemed to go on forever.
The commentary was read by an English speaker and I can't imagine how he kept a straight face as he did it.
We eventually left, feeling bamboozled.