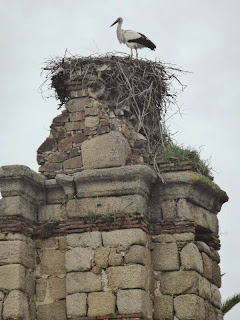 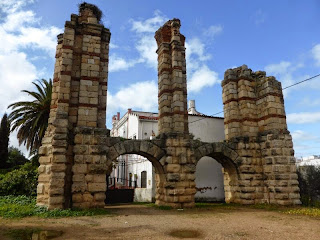 Firstly a correction from yesterday - Darren was outraged at my description of Merida as just any old 'Roman town'.
He pointed out that the town was founded in 25bc on the orders of the Emporer Augustus, and was called Emeritas Augusta. It became the capital of the Lucitania Province and was one of the most important towns in the Roman empire.
It was like calling London a town, and explains why it had such fantastic facilities. Please take note.
Today, we cycled into Merida to check out the sights that we missed yesterday. We saw some original roads and mosaics, but the best thing was the white stork on a nest on top of a ruined aquaduct pillar.
A friendly old Spanish man gave us a long winded explanation as to why it was here and not with its friends for the winter in Africa.
Unfortunately, he spoke very quickly and waved his arms about dramatically, but it didn't help me to understand what he was saying. In a break in the lecture I said 'si, gracias', which must have been the wrong answer as he suddenly realised that we weren't taking it in. We smiled each other and he started his lecture again, but fortunately some of his friends appeared and we made our escape.
So we are non the wiser, maybe it is a lazy stork, or perhaps poorly,  but I was really chuffed to see it anyway.