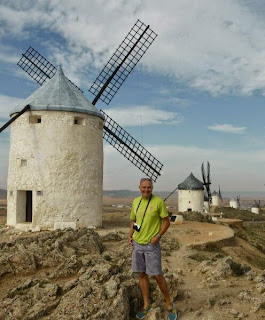 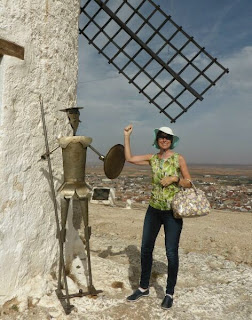 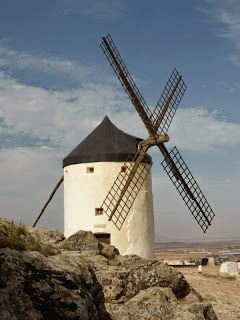 We have arrived in the central Spanish district called La Mancha, and I was really pleased as I thought it was where Don Quixote used to live. I excitedly looked him up on Wikipedia, only to realise that he was actually a fictional character!
In the book, which I have read, Don Quixote was a completely crazy nobleman who went around the countryside dressed in a coat of armour and riding on a donkey.
He was obsessed with chivalry and spent all of his time trying to rescue damsels who were not in distress and getting into fights because of his outrageous behaviour.
One of his most famous scenes is when he sees a bunch of windmills on a hillside, thinks that they are giants and tries to fight them. He is very unsuccessful and gets stuck in the arms of the windmill as it carries on turning.
We went to Consuegra which is thought to be where the action, from 1605, was based.
We left the campervan at a restaurant at the bottom of the hill and walked up to where twelve windmills still stand in a long row.
Each of the windmills has its own name and picture 3 is called Sancho, after Don's unfortunate squire Sancho Panza, who spent all of his time desperately trying to stop his boss getting into trouble.