On top of the mushrooms 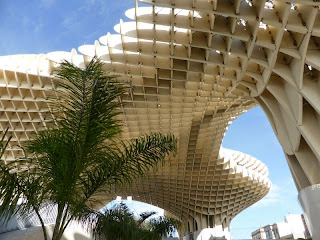 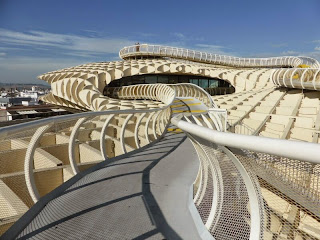 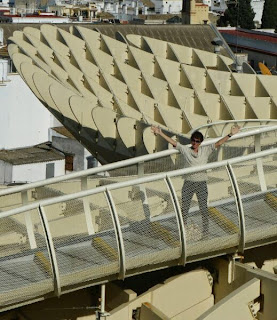 We first saw this amazing structure a couple of nights ago, but it took us until today to return for a closer look.
It dominates the Plaza de la Encarnacion in Seville and was completed in 2011.
The building has many layers, firstly directly beneath the building is the remains of a Roman town. It was discovered ten years ago when the city wanted to install an underground car park. Once the ruins were found the car park idea was cancelled, and the ruins are now restored and open to the public.
We had a good nosy around and there are some excellent mosaics and displays.
The next layer has a partially underground market, then a plaza area with bars and restaurants.
Finally, we caught a lift to the cap of the mushrooms and it found a windy walkway that meanders all over the top.
The mushrooms are honeycombed so you can look over the railings straight down to the Plaza below, so it was a little scary.
The views were great, right across the city in all directions. We also made a quick stop at the hidden bar right in the middle - from our angle it was sort of like a stuffed mushroom.