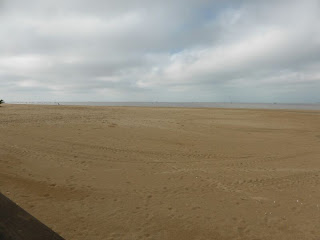 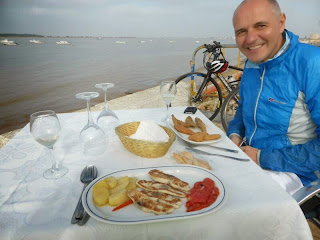 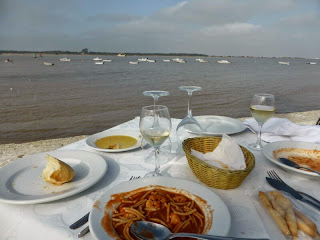 We got the bikes out today and cycled a very round about route to Sanlucar de Barrameda. Our planned route would have taken us through a Spanish Naval base, and we got as far as the barbed wire fences and military checkpoint before having to turn back.
We then followed a road and got to a warning sign saying that it was closed.  We didn't want to even further retrace our steps,  so we ignored it and ended up on a closed dual carriageway that was being resurfaced. It was nicely done, very smooth, and we managed to avoid the workmen. We finally crossed back onto the carriageway, and after 44k we arrived at our destination.
At first it was very disappointing, our leaflet said that we couldn't leave without savouring three things:-
Horse races on the beach - no sign of any today.
Wineries - we have possibly tasted too much wine and sherry recently, so we didn't go to a winery, but tried a glass with item 3.
Famous prawns - tick.
Actually, lunch was quite a revelation. I was completely stuck as everything on the menu was fishy, and the waiter spoke no English.
I am usually frightened of anything in it's shell, with legs, eyes, skin, bones or anything that resembles it's original shape. However, I had to be brave and ordered the menu of the day with Daz, but I did say 'no little fried fishes for me, por favor'.
Our first course of prawns, white fish and salad was fantastic. Second of prawns and noodles was also good. Third course, Darren got a plate of whole fried fishies, but mine was good and not scary at all.
The waiter excelled himself with the desert and gave us the choices in English - tart, pudding or lemon something or other that we couldn't quite follow.
Great meal in a brilliant location.
Picture 3 is supposed to be similar to the El Bulli exhibition from a few weeks ago, and puts you in my seat for lunch.
Ps, the other famous thing about S de B is that 'in 1519 the first voyage around the world set out from its shores, showing that the earth is round'. Not sure if I believe that one. (Not that the earth is round, but the other bit.)