Across the mountains from Ronda 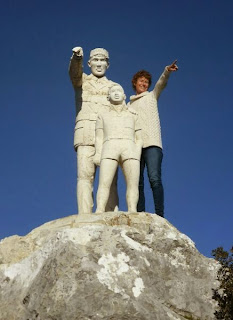 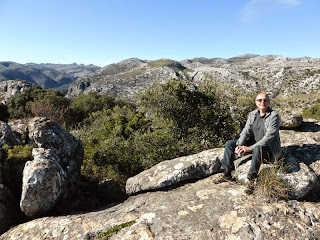 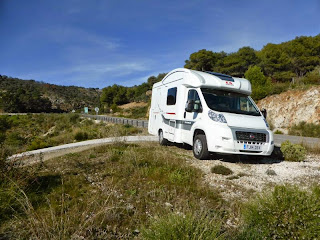 We reluctantly left Ronda today and set off to our campervan's temporary winter home.
As expected, the scenery was beautiful and we stopped at a viewpoint above the white village of El Burgo, and we saw two statues perched at the highest point. Darren wondered if they were two of those people who stand still for hours on end with a little collection box.
I can confirm that they didn't move when I grabbed a leg to hoist myself up onto their plinth, so I have to assume that they were the real thing.
Later we stopped for an al fresco sandwich at the top of someone's driveway, and our van enjoyed a little break from all of the twists and turns on the road.
Finally, we stopped to explore another white village and I took the chance to get a haircut. The lady who cut it spoke no English, but her colleague asked me what I wanted, then told her as he left for his Christmas holidays. His last word was 'informal', which means two things in my Spanish dictionary - informal and unreliable.
The lady cut my hair quite nicely and all was going well. Afterwards she dried and styled it so that it stuck up vertically and sideways in all directions.
She then asked if she could take some photos. I thought at first that she didn't have a mirror and wanted to show me the incredible back, but no, she kept posing at all different angles with my head while her assistant snapped away.
She stopped to show me about six of them, but then decided to take loads more. I have no idea why, perhaps she was really pleased with my unreliable haircut.
I would show you a photo, but I have been using my hair to dust the van ceiling!