Posing by the sea 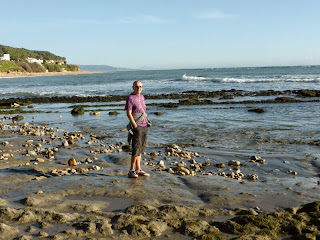 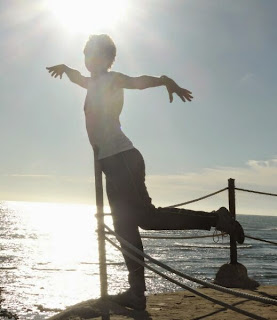 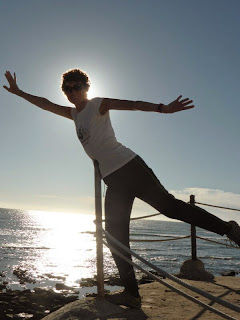 We are still on the Costa de la Luz, and went for a nice walk this afternoon.
I picked up a map from our campsite reception and we set off to follow it to a tower on the top of a hill, as it apparently had beautiful views across the coast.
We had a bit of trouble finding the path, and then we lost it by taking a shortcut up a very steep bank. Eventually we found a mobile phone mast amongst a pine forest, but there was no sign of any tower.
We decided that the language barrier meant that the pine forest itself must be beautiful, and the mobile phone mast must have been the tower.
Disappointing, but anyway, we carried on through the forest, climbing through a barbed wire fence to get back on a road to town.
Down at the coast I decided to strike a pose from the film Titanic on a railing reaching out into the sea. Unfortunately, due to it being too long, I haven't seen the film, so instead I ended up going for more of a Strictly Come Dancing theme.
Later as we walked along the beach back round to our campsite, I noticed a large tower on the top of the pine tree hill, so something went badly wrong with the navigating today.
Ps, Daz looks quite dignified in comparison.