Santa is on his way! 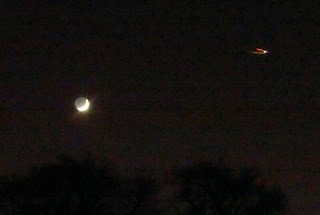 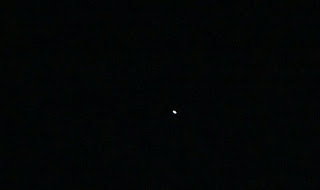 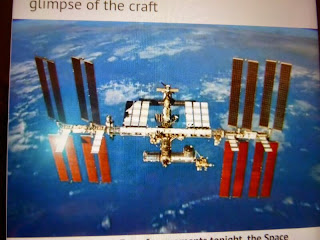 Darren read in one of the newspapers that if the sky was clear tonight, and if we looked in the right place in the sky at exactly the right time then we would see Santa on his sleigh! He would be heading off to deliver all of his Christmas presents all over the world.
Of course, this was very surprising, so I had to check it out for the blog.
For some unknown reason, the papers are saying that the International Space Station could be mistaken by young Santa believers as him on his sleigh.
I was ready and stood on a fairly busy London pavement at 5.22pm, for the three minute chance to see it.
There was a lot of action in the sky with planes and even a couple of helicopters competing for attention - my first shot is actually the moon and a low flying aeroplane.  However, if you scrunch your eyes up and drink a large gin and tonic very quickly, then it does bear an uncanny resemblance to a red sleigh.
A couple of minutes later and exactly on time the space station did appear and shot across the sky, but it only looked like a very fast moving star.
The website tells me that the Spacestation is as big as a rugby pitch and orbits the earth every 90 minutes so the astronauts on board see the sunrise 15 times a day!  To me that is far more interesting than being a pretend Father Christmas.
Picture 3 is the actual Spacestation, and is a photo of it from the Internet, not a super zoom in from me.