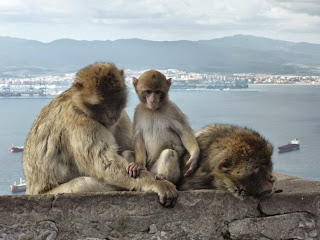 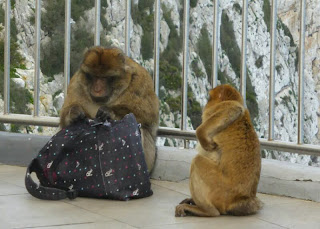 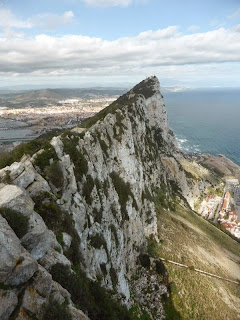 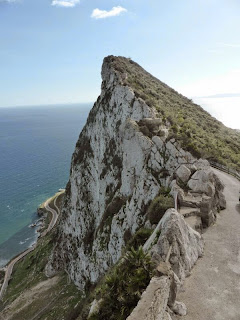 Cycled onto Gibraltar again for a day on the top of the rock. We walked up lots of steps and found ourselves on mainly deserted one way roads and footpaths.
Fantastic views in all directions and first stop was the excellent Great Seige Tunnels, where we wandered around inside the rock. We learned that there are more than 52 kilometres of tunnels, which seemed an amazing amount on such a small mountain.
We then carried along towards the top and came across our first Barbary Macaques - tailess monkeys that roam freely around the rock.
It started well as they ignored us, but when we reached the top of the cable car station Darren went to take a photo of a cute monkey sitting on a railing. Suddenly it charged towards him and I ran into a stairwell to escape.
There were monkeys everywhere and a group of Spanish girls were running away from them screaming and laughing.
I had had enough nature and went to hide in the safety of the gift shop.  I then found a viewing platform with no sign of any monkeys, so went out to take some photos of the glorious views. (See pics 3 and 4, one looking back to the mainland and one in the opposite direction.)
Darren and the Spanish girls joined me and the girls asked Daz to take their photo. They were all posing and one girl had just taken off her rucksack when, like a flash, a monkey appeared, grabbed it, then started unzipping it.
The girls screamed properly this time, one girl was hiding behind Darren, while another was trying to grab the bag. The monkey was having none of it and aggressively defended her prize.
What a relief it wasn't me, I thought, as I watched the drama from a safe distance.
In the end the gift shop manager appeared with a long pole to try to hook the rucksack. The monkey realised she was beaten and reluctantly jumped back over the railing and disappeared.
I was going to have a calming glass of wine, but it was too expensive,  so we gingerly headed down the hill. The monkeys were all sitting in the middle of the path so we had to pass by, expecting one to leap on my back at any moment.
We walked up to another viewpoint, but couldn't go in it as a really big one sat right at the entrance glaring at us.
Further along the trail we reached the excellent St Michael's cave. It is a massive space that hosts concerts amongst the stalactites. It was lit with rainbow coloured lights and hidden speakers played Hotel California as we explored.
Great day out, but probably more frightened of monkeys now than I was yesterday.
Ps, our ticket also included a visit to the Ape's Den but we gave it a miss.