Birthday day out in Bolonia 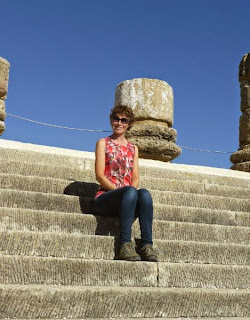 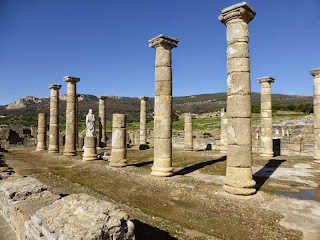 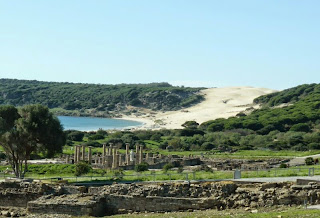 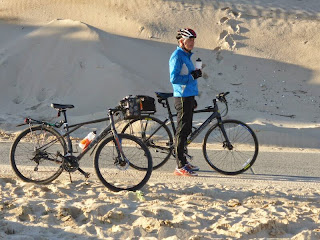 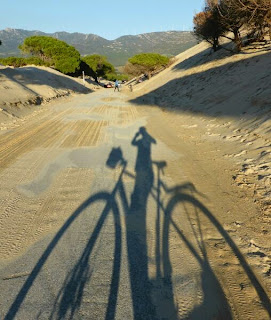 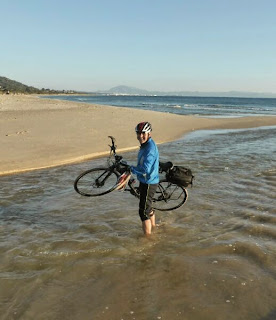 I had grand plans for my birthday day out - day trip to Tangier, galloping on horseback along the seashore, etc,  but I didn't get around to sorting anything out.
Instead I decided on an easy jaunt along the coast to Bolonia. It was only 16k each way on Google maps, although it never shows hills, so the mountain that we had to climb to get there was a surprise.
Bolonia has some fantastic Roman ruins, as a major town called Baelo Claudia was built there in the 2nd century bc.
We had a look around and the location was fantastic, a golden sand beach with huge sand dunes at one end, a beautiful bay, seven miles across the sea from Morocco and right at the entrance to the Mediterranean.
Here I am sitting on the steps of the Temple of Isis, and I could imagine myself wandering around the town in a cute toga.
Next stop, birthday lunch of tapas, wine and ice cream.
Setting off back for home we decided to avoid the mountain and follow a path around the coast. Bad idea, as very quickly the path disappeared, and then we were pushing the bikes through deep sand, around pine trees and bushes, up hill and down dale.
It was exhausting, but we eventually got around to the other side and arrived at another sand dune.
The sand had been cleared from the road, but the massive dune was just waiting for another windy day to cover it over again. By this time I was quite tired of sand, but Darren ran up to the top of it to check out the views.
We were now not far from home, but Darren has a new toy - a bicycle sat nav - and it advised that instead of taking the main road, we should cycle along a small side road that skirted the base of the sand dune.
What it didn't mention was that we had to cross a river, and there was no bridge! There was no alternative but to wade through, although Daz made less of a fuss than I did.
Arrived home not long before dark, exhausted, sandy, soaked and happy. Not very pleased with the new sat nav though.