The Sun and Paddington Bears 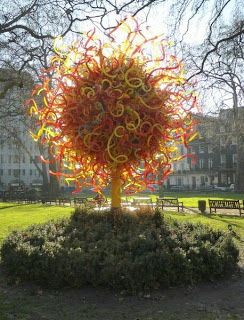 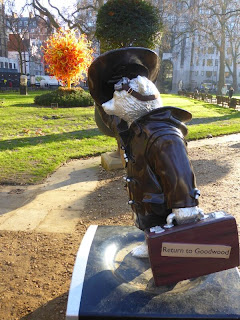 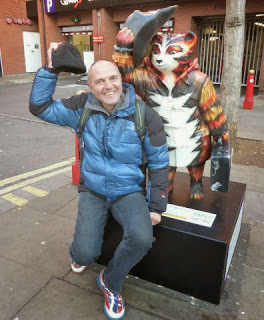 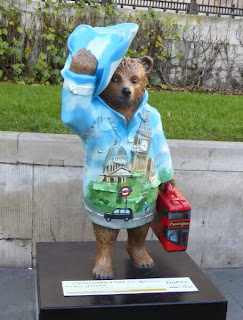 I am so happy with this first photo and think it is one of my best ever shots!
I even have a title for it 'Total eclipse of the Sun' based slightly on a song by Bonny Tyler, but mainly on an amazing sculpture by Dean Chihuly in Berkeley Square.  We have seen Mr Chihuly's work before on our trip to Seattle on the 16th September 2012, my first ever referral to one of my previous blogs!
We loved his work, both then and now.  The statue is 5.5 metres tall, weighs 2,000 kilograms and it lights up every night. I managed to angle it so that the real sun is illuminating the glass sun, but it also looks pretty good behind Rolls Royce Paddington in the next picture.
We spent the rest of the day tracking down other Paddington's around London. Among others we found Darcy Bussell's in Covent Garden, Andrew Lloyd Webber's in Chinatown (pic 3 thank you for the pose Daz), Nicole Kidman's, Ant and Dec's, Benedict Cumberpatch's and Boris Johnson's in Trafalgar Square (pic 4).
Very sadly we couldn't find David Beckham's bear, called Golden Paws, near Buckingham Palace, although we did look for ages.
Thanks to Margs, Dave and Susan for today's outing suggestions.