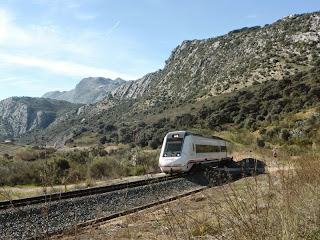 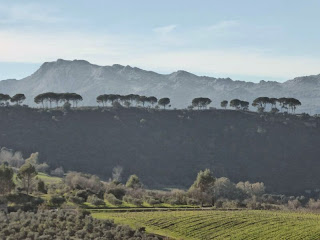 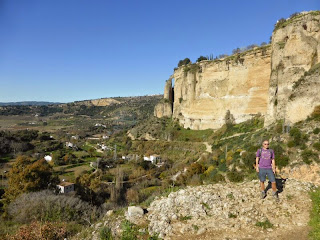 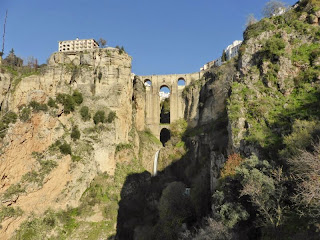 We got up before dawn (not actually that early as the sun doesn't rise until around 8.30), but we were on the road and heading for the train station just before then.
We caught a train to Jimera de Libar and set off back to Ronda.
The first 8kms was along a quiet path by the side of a river and the train track. It was very cold as the sun was low, we were on the shady side of the valley, and I really wished I had brought my gloves.
We then stopped for a second breakfast at Baneojan -another white village - and headed up into the sunshine. The hills got higher and the countryside was beautiful. We even saw a couple of deer that jumped across our path.
We then followed the train line again, before climbing over the crest of a hill. We arrived at the far back and left hand side of picture three and headed towards Ronda.
The views were completely breathtaking, and if you ever get the chance, then you really should come and see it for yourself.
Ps, longest walk ever today at 27kms, 1,000 metres climbed and most importantly, 37,354 steps!