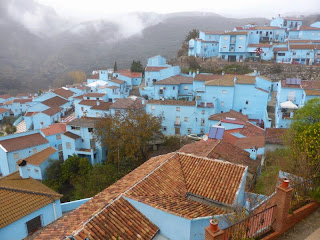 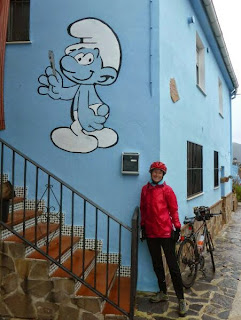 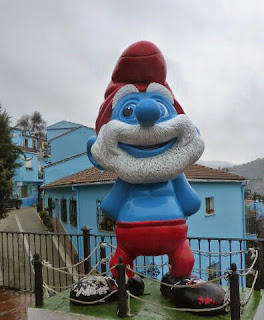 We are in an area surrounded by beautiful white painted villages, but we chose to visit the only one that is painted Smurf blue.
Before 2011 the little village of Juzcar welcomed 300 tourists per year, but when the Smurf movie was released the film company decided to paint all 281 houses in the village blue to publicise the films release. (Don't ask why as I haven't seen the film and have no idea.)
That year 80,000 tourists visited, so the locals held a vote and instead of repainting the houses white again, they decided to keep them blue.
We added to the tourist tally for this year by visiting today and it has to be said that we picked a terrible day for it. The weather forecast was mainly sunny, and we set off in high spirits. It was quite steeply uphill for the first 8kms and we were soon inside a cloud.
It was then a long, very cold, scary downhill, followed by lots of ups and downs.  Eventually we rounded a bend, and there, in all its blue glory was Juzcar - now also known as Pitufo (that's Spanish for Smurf! )
It was actually better than we expected, with murals and statues all around the village, but our main priority was to get inside the bar to warm up.
An English couple who live in the village, started chatting to us, and bought us coffee with a brandy chaser which was lovely and completely unexpected.
Leaving the bar some time later it had started raining, but the English lady had told me it was mainly downhill on our circular route home. I don't know if she was just being nice, or if she had never noticed when driving the journey in a car, but it was 10kms uphill without a break to the main road.
It kept me warm though, and we arrived home safely, but so wet that I wrung my socks and gloves out in the sink.
Good outing, and sun is forecast for tomorrow - not sure if I believe it now though.