Round the rock in Gibraltar 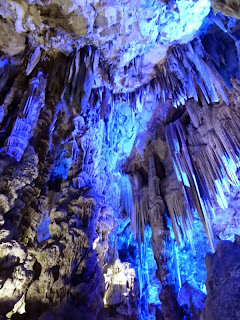 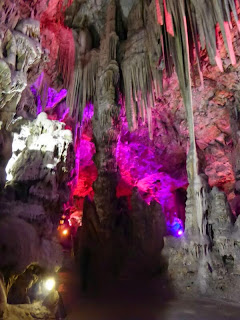 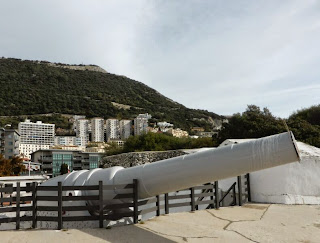 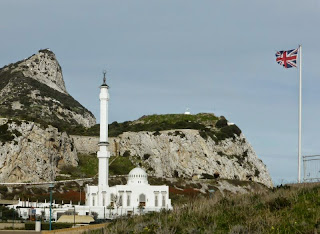 Firstly, following a bit of feedback from Darren, I am returning to subject of St Michael's Cave from yesterday.
So turn off the lights, zoom in on the first two pictures and start humming - duum, duum, dum, duum, dumdum, etc. (instrumental start to Hotel California) That should give you a better understanding of what it was like to be there, and how brilliant it was.
Back to today and we again cycled to Gibraltar, but this time we stayed as close to the coast as possible on a full circuit of the country.
We stopped to look at the Marina, (excellent), Morrisons car park (mistake), hospital car park (another mistake) and then the 100 ton gun. This was a very impressive Victorian super-gun, that was never actually used in a battle.
After that we had to push the bikes up some super-steep streets and then down to the Gibraltar Lighthouse. It dates back to 1841 and was a pretty red and white standard looking lighthouse.
Picture 4 is the view from the lighthouse, past a Mosque and back to the rock. From there we cycled round the right hand side of the Mosque and up a steep road overlooking the sea.
We came to the entrance to a long road tunnel and headed in. The road turned sharply right and headed downhill. We cycled as fast as we could, and eventually spotted daylight ahead.
We emerged on the seaward side of the island where there are vertical cliffs and a very narrow sliver of horizontal land with only the road and a few hotels on it.
We followed the road back round to Winston Churchill Avenue, over the border and then back home.
Good day out and we have just about seen all of Gibraltar - moving on tomorrow.