Oldest bullring in the world 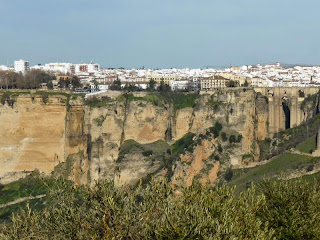 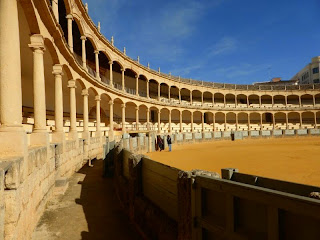 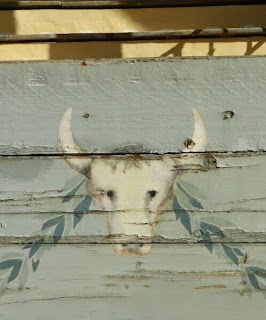 We walked into Ronda today and took a detour along a footpath to a church built into the rock. Unfortunately, it was closed, but the views along the way were beautiful.
Back in the town we decided to visit the bullring as the boss of our campsite recommended it. Normally, I wouldn't set foot in such a place, but he said that it was the oldest in the world and an interesting tour.
The first fight took place in 1785, and we saw some of the original costumes that the matador used to wear. They must have been either super-tight, or else they were very tiny men, as they looked as if they would fit ten year olds - particularly the trousers.
I was pleased to hear that they now they only have three sessions a year, as the whole event is horrible and the bulls don't stand a chance. Unfortunately, only one matador was gored to death by a bull, and he was buried actually under the ring. This compares to six bulls every show for over 220 years - an absolute minimum of 3,960.
The building was very impressive, with hundreds of columns. It was very interesting to see where the bulls were coralled along narrow corridors and then through the gates out into the ring. We saw the painted boards around the ring, but the drawings of the bulls made them look very sad.
Obviously, and like all of the other tourists, we had to prance around with pretend capes in the centre of the ring, and I apologise for that.