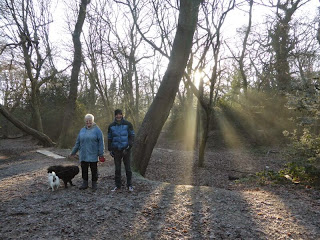 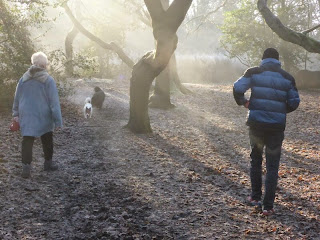 Darren's mum lives across the road from Epping Forest and we joined in with the daily dog walk today.
We were following in famous footsteps as King Henry VIII and Elizabeth 1st might have hunted there. Also, James Herbert set his book 'Lair', that was about giant rats in the forest.
Dick Turpin, the famous highwayman used to have a hideout in it and because of its tree cover and close proximity to London, numerous murder victims have been buried there.
For example, in 1999 one of the characters from Eastenders accidentally killed someone and buried her body in the forest.
Lots of action over the years then, but today was quiet and still. The only worrying time was when sausage dog Monty disappeared for ages while chasing squirrels.