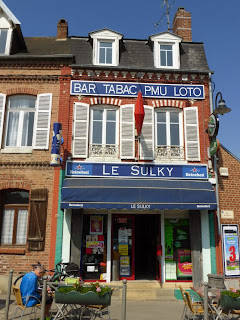 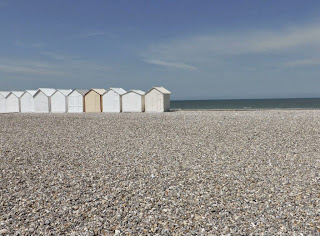 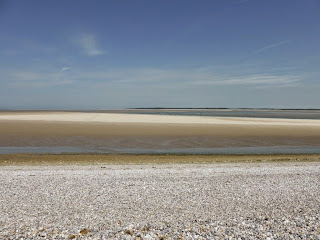 We were looking for the 'Le Mardy' bar, but instead came across Le Sulky, so we had to pop in for a coffee.
It was only 11am and all of the locals were happily drinking from sophisticated looking wine glasses, but we had a long cycle ride ahead so we decided not to join them.
Actually, we were both pretty cheerful today, enjoying the sunshine and fantastic off road cycling routes in the Bay of the Somme.
Our campsite is a few kilometres inland and we followed the river Somme right onto the beach.
We then had a bit of difficulty locating the sea as it had disappeared off into the far horizon.  However, when we cycled out of the bay and along the coast we found it hiding behind a row of beach huts.
We then had a nice lunch and I hoped that the sea would follow us back to the bay, but no, it obviously had other plans for today.
Ps, the guidebook told us to look out for seals basking on the sand, but they must have been busy too.