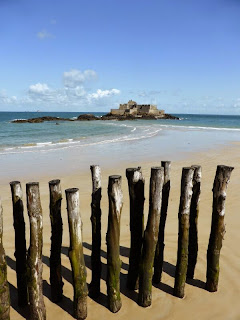 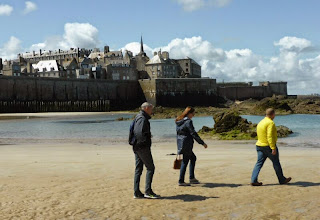 We sat in the van yesterday morning as hailstones were hammering on the roof and worried what our friends Tina and Matt would make of their mini break with us. Of course, they were staying in a lovely boutique hotel inside the ramparts of the city, so they were better protected from the elements than we were.
It did seem strange though that in all of my recent blogs we have been in shorts and teeshirts, and yet on the day they arrived we had to dig all our cold weather gear out  - are we habitual liars who have just been caught out with the photoshopper?
Surprisingly, by the time we met up the sky had cleared and we could start the day properly.
We were waiting for the tide to go out so that we could visit an island that is only accessible for a few hours a day. (That's it in the distance and we think that the line of logs planted in the sand are to help protect St Malo from stormy seas.)
We trotted towards it across the sand, with Tina's lovely diamanté encrusted slip ons suffering rather badly. Once we reached the island we had hoped to look around the fort and write a report about it on the blog, but of course, it was closed.
Undeterred, we carried on walking and eventually ended up back at our van. We are staying just around the bay from St Malo on another raised bit of land surrounded by the sea.
Matt and I set off to discover relics from the second world war that are all around our campsite. There is a museum, which of course was closed, but we saw the huge concrete fortifications and then three German pill boxes that had the most terrible damage to them.
They had been hit by dozens of shells in August 1944 when the Allies were starting to take back France. Each of the holes is at least six inches wide and they appear to have melted the solid metal. Most of the shells had only penetrated a few inches into the metal, but in two out of the three boxes, at least one of the shells had made a hole right through into the middle.
After a few days the German's surrendered and it took 12 years to rebuild St Malo and surrounding area.