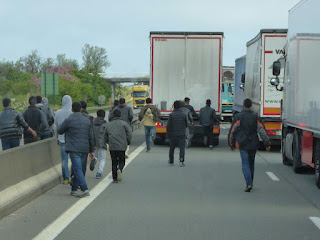 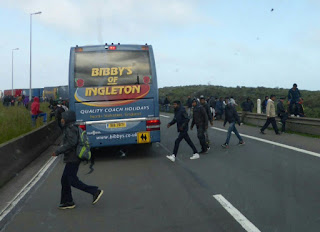 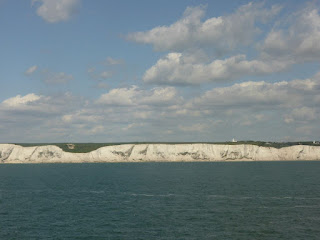 Our last morning in France and there was one final surprise for us on the way to the port. We were about three miles out and driving along a dual carriageway, when we saw a huge queue of lorries.
Running around the lorries were hundreds of men, mainly in large groups who were attempting to break into the back of every lorry. They managed to get lots of them open and then they either grabbed what they could and ran, or jumped inside.
They were all around us, but didn't touch our van, and some even waved and smiled at us. It was a frightening experience as we didn't know that they weren't interested in us at first.
There was also a few dozen police, but they were massively outnumbered, and the chaos went on for a  couple of miles, right up to the port gates.
We were then stopped for ages waiting to get through customs,  as police were checking under cars and they asked us loads of questions to make sure that no one had either got in our van or any of our outside cupboards.
The customs officer said that it was always like this, so I think that next time we will make a different crossing.
Once on board the ferry, things returned to normal and we watched as the white cliffs got closer and closer.