Back in sunny Spain 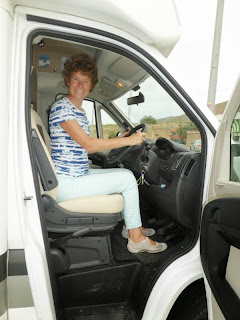 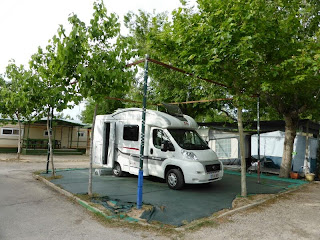 It's good to travel, but it's also nice to get back home.
We faced a few delays as we missed our flight last week, and because of the bank holiday weekend, we found that all of the later flights were full.
Instead we did what in hindsight we should have done all along, and spent a few days in London with the family.
We arrived back in Malaga last night and were met by Jeff who has been looking after our campervan while we were away. He has taken great care of it - even plugging in the electric cable to keep it charged and happy.
We stayed at Jeff's campsite overnight and warned him that we would be leaving really early this morning. We woke up just before 9am and left at about 10, so we probably weren't his most efficient ever guests.
We had a big driving day planned and took it in turns to cover over 600kms. We plodded all day along the Autovia, which is a dual carriageway that stays fairly near to the whole coast of Spain.
I found overtaking the big lorries a bit scary, but we have arrived, and camped on the outskirts of Valencia without any incidents.
Our next definite appointment is a ferry from Calais at the end of the month, so we are gradually making our way north.