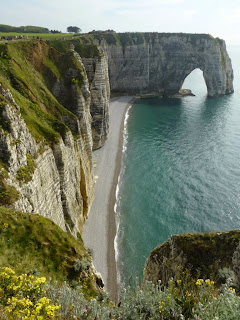 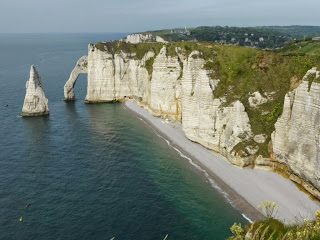 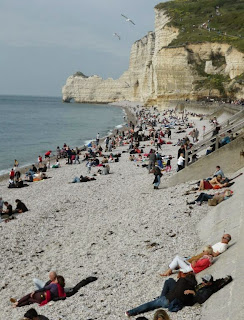 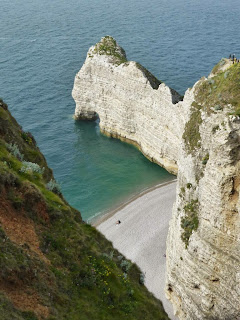 We drove to Etretat this morning because I knew that Monet had painted several of the views along the coast here. He really liked the area and often visited - so if it's good enough for Monet, it's good enough for us.
He was right, the area is absolutely stunning, and the three rock bridges out into the sea were incredible.
What was even more interesting than the views though was the thousands of French people out enjoying themselves. The footpaths up the cliffs were packed full, all of the bars and restaurants were overflowing and the beach was busy even though it wasn't a warm day. Most of them were carrying picnic blankets and refreshments, and everyone was having a lovely time.
This weekend is the third bank holiday in France this month and couple of days ago I had an amusing conversation with a French lady. She told me that the French loved two things - bank holidays and going on strike!
I will add a third thing from my own observations - boules. They play it constantly and are really skilled at it. It is a shame it isn't an Olympic sport as they would surely win the gold medal.
Ps, my French is improving at long last, and my conversation with the French lady was mostly in French, but she did have to tell me some of the key words in English.