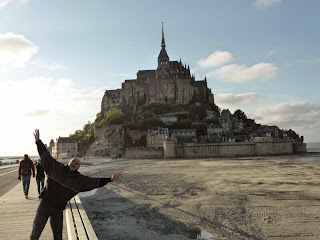 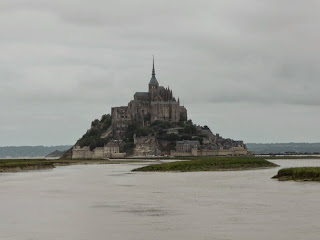 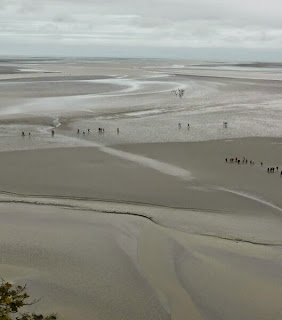 Last night we arrived at the world famous Mont Saint Michel and settled into our campsite.
As it was a nice evening we decided to take a walk to see the Mont from a distance, but it looked so inviting that we caught a bus along the causeway right up to the ramparts.
It was very imposing and impressive, and was surrounded by miles of sand.  There was no sign of the sea, so we decided to head towards some people who were out walking on the sand.
We could see footsteps around the outside of the city walls  so we decided to just take a little walk to see if we could get all the way around it.
It was quite sticky and muddy so I dawdled along trying not to get my new sandals dirty. We nearly made it right round but then the mud got deeper and wetter, and in a slightly stroppy way, I decided that I was going back the way we came. Darren was incredulous, but I wouldn't budge so we started off back again.
Part of the way round there was some stone steps up to an ancient little chapel and we were slurping back towards it through the mud when suddenly we looked up and realised that the sea had arrived -  incredibly quickly and it was looking very angry.
What do I do in difficult situations?  Panic.
We ran up the steps to the chapel and I knew that we weren't in any danger, but it was very cold and I didn't fancy spending the night there.
Daz ran down the other side and saw that there was time to run the last 100 metres back to the causeway, so we legged it back in record time.
While we waited for the bus back we watched the sea racing in all around us and we just assumed that this happened every day.
Once we got back home I looked on the Internet and it turns out that we had decided to take a walk on the night of one of the highest tides of the month, and only two hours before high tide!
We went back this morning, but the sea didn't come up as high, and for two weeks out of every month it never even gets anywhere the Mont. In fact, this area sees the highest tides in Europe and the height between high and low tide is often more than 40 feet.
Pic 3 was taken from the top of the ramparts this afternoon and the water was so far away that we couldn't even see it -  but it was nice to see that there was loads of people out on the sand and they had gone way, way further then we ventured.