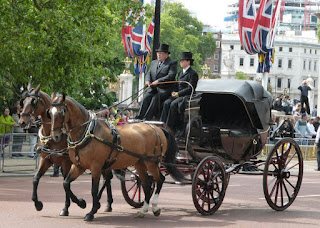 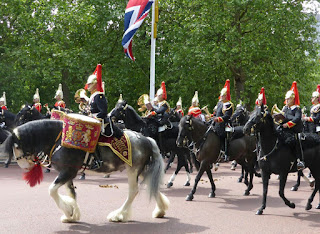 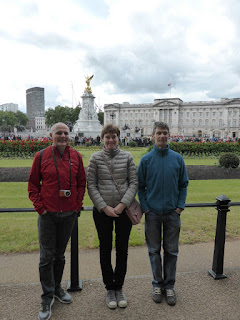 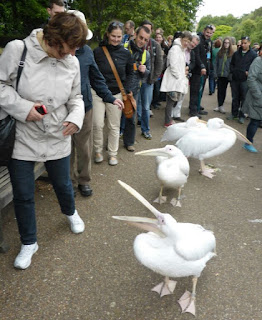 My sister and brother in law are spending the weekend in London with us, although we are in our campervan, and they are nearby in a little tent.
Today we all went to Buckingham Palace to see the Major General's Review. I had never heard of it until yesterday, but basically it is the first dress rehearsal for the annual Trooping of the Colour. I didn't know what this was either, but it is a massive event to celebrate the Queen's official birthday and it involves over 1,200 military personnel and at least 200 horses.
They start from the Palace, march down the Mall to Horseguards Parade, where the Queen inspects her troops and takes their salute. For the first rehearsal a Major General stands in for the Queen, and then their is a second rehearsal a week later where a Colonel takes her place.
Everyone was beautifully dressed and looked really excited and pleased to be there, including us, with the exception of the massive grey fluffy horse that carried the big drums. He looked bored with the whole thing and sulked his way down the Mall.
We then went over to St James' Park for a coffee stop and to look at the exotic bird life on the lake. For some reason the pelicans were all on the pathway, and Elaine said it was okay to walk past them as they were friendly.
The lady directly behind me wasn't quite so lucky and I looked back just in time to see a pelican attack! No one was hurt and I think it was just the pelicans way of asking for some fishy treats.