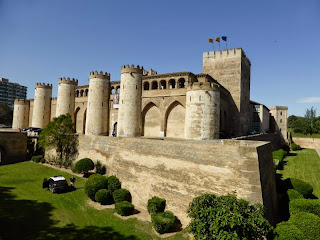 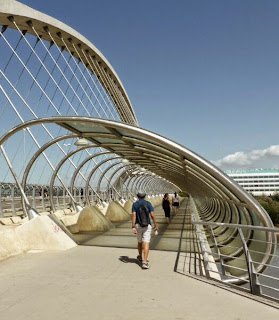 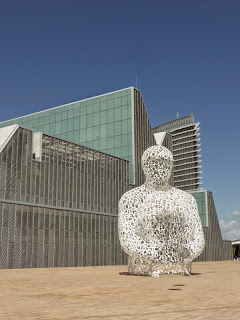 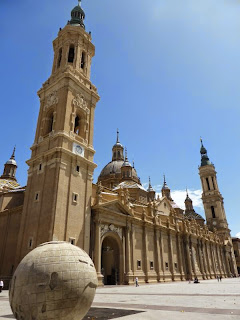 We drove for most of the day yesterday and ended up in Zaragoza, the most isolated city in Spain. It is inland in northern Spain and is known for its historic old town.
We didn't visit yesterday afternoon as it was hot and sunny, so I lazed around by the pool before enjoying a couple of sangrias.
This morning started crazily early - just after 3am - as we got up to watch the election results and drink continuous cups of coffee until the milk ran out.
Once it was all done and dusted, and feeling as if we had already done a full day, we then caught a bus to Zaragoza to investigate.
Just about the first things that we saw were the remains of a Roman wall, a tower that almost rivalled the leaning Tower of Piza for it's vertical issues, and a 13th century tower that wore us out, as we climbed to the top floor for a view of the city.
We decided to visit the Aljaferìa Palace (pic 1), and then a long hike took us to the site of the Expo Zaragoza 2008. It was a very ambitious modern area that looked great from a distance, but once close up it seemed that many of the buildings were empty and it had a rather neglected feel to it.
Moving on we went to see the Basilica del Pilar which was gigantic and magnificent. It was that big that it was impossible to get a good photo of it as no matter how far away I stood it completely overflowed the screen.
Finally we stopped for refreshments in a deserted tapas bar, and it cost 2 euros each for a glass of wine and a choice of tapas. Daz chose a dish that was shaped like a little duck, but turned out to be a hard boiled egg in batter for the body, with a prawn in batter held on with a cocktail stick acting as its head.
Ps, I had a mysterious fried torpedo that might have included mushrooms in its list of ingredients.