Messing around by the river 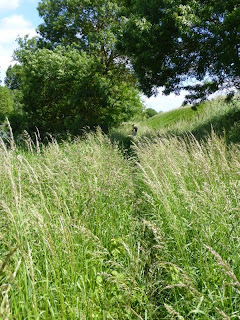 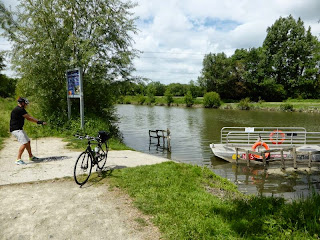 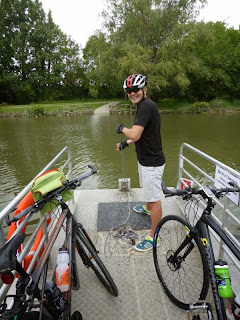 Today I am just going to write about a little issue that we faced on our cycle ride to Angers.
We were cycling along and both getting a bit mardy with each other as my cycle map said one thing, but Darren's sat nav kept yelling at us to do an urgent u turn.
Surprisingly we were both right - we cycled round a sharp bend and stopped at a wide, deep river that had no bridge. What it did have though was a chain disappearing into the water, and a little boat bobbing about on the opposite bank.
There was also two tourists looking very despondent and they told us that the chain was stuck so it was not possible to pull the boat across.
They left us to it and cycled back the way they had come, but we were made of sterner stuff. I decided that the best thing to do would be to cycle along the river bank until we got to a bridge, so we set off with me in front and in full bossy mode. The path got narrower and then disappeared into massive nettle and bramble patches, but somehow I managed to carry on - right until I had to stop.
It was obvious that we had to go back, and it was a really bad time to lose my nerve, but for some reason it looked too difficult to go back the way I got there. In the end I managed it with only minimal scratches and stings.
Unfortunately Darren was wearing shorts so fared far more badly, and as I am writing this blog his legs are still bright red and swollen.
To make things even worse, when we got back to the chain, Darren pulled it really hard and the boat started heading towards us!
The chain was caught around something under the water so the little boat stopped about six feet from the bank. Daz jumped onto it and then managed to throw some of the chain to me so that I could pull him back to the shore.
As you can see, we made it across after all.
The end.