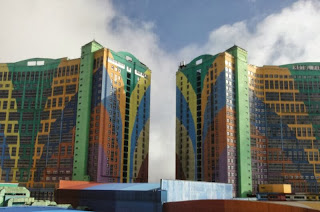 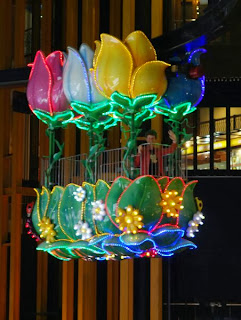 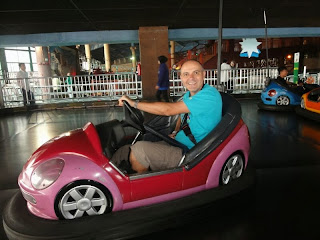 Woke up on our last morning in Genting to see that the sky was clear and we could at last find out what the area was like.
I was keen to rush outside in case the weather closed back in, and we saw that our hotel really was painted in rainbow colour, just like the scale model.
Genting is a big casino resort, the Malaysian equivalent of Las Vegas or Macau. It is also marketed in Malaysia as a cool retreat from the hot weather, and it has been fun seeing people dressed in gloves and woolly hats, as this is only place that they ever get to wear them.
We had a great time in the indoor theme park.
I enjoyed a slow ride around the park in my flowery carriage, but we also went on the roller coaster at least five times. On a couple of runs we were joined by a group of about 20 over excited middle aged Indian men, they spent the whole time yelling to each other and then screamed louder than me on all of the scary bits.
Also had a great time on the dodgems where I tended to stay around the sides but Daz bumped everyone out of his way.